Sanell Aggenbach’s work is imbued with a haunting ambiguity characterised by her materially multifarious nature as she moves comfortably between the various disciplines of painting, printmaking and sculpture. Her current work is focussed on notions of land, underlined with issues of occupancy, ownership, and ideas of the real versus projected fantasy.

Crossfire: Crest (2012) portrays a mountainous landscape painted in a subdued pallet. The canvas is pierced with aluminium arrows that spread into the area surrounding the work. While these over-sized arrows appear comical at first, a sombre undertone of implied violence becomes apparent. This is an afflicted space fraught by the aftermath of an evident mêlée, an allegorical attack where the wounded land acts as a metaphor for one’s own established beliefs and ideologies.
In contrast, the accompanying monotypes convey a more fantastical vision of land. The crimson-tinged colours and titles such as Olympus Mons and Phoenix suggest an imagined Martian landscape. Humorously playing into what Aggenbach describes as “Caspar David Friedrich on acid”, the monotypes extend Romantic notions of the sublime and depicts solitary figures wandering expanses of land. Despite incorporating this visual vocabulary, the “untouched wilderness” of Aggenbach’s monotypes subvert the problematic often inherent in the genre by explicitly acknowledging the depicted landscapes as a constructed fantasy. 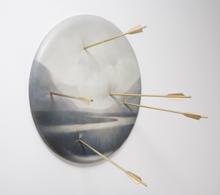 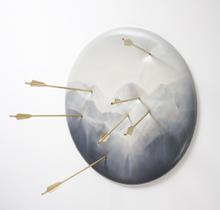 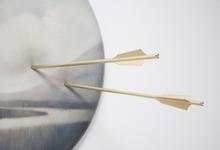